A Message from the Pokémon Masters Team (Vol. 12)

A Message from the Pokémon Masters Team (Vol. 12)

We’re the producers of Pokémon Masters, Yu Sasaki and Tetsuya Iguchi, here with a new message for you.

Today, we’ll discuss plans for the one-year anniversary celebration and other updates happening through August. We’ll also talk about the stamina system and other planned improvements to existing features.

Thanks to Professor Bellis’s tireless research on Pasio, new Pokémon Eggs have been available since late June.

The player character has the option to form a sync pair with the Pokémon that hatch from these Eggs. It doesn’t take as many resources to strengthen a hatched Pokémon as it does to strengthen other Pokémon, so we hope you train with a lot of them and try forming various teams.

Additionally, the Bug-type Egg event is scheduled to begin soon.

It’s your chance to get Eggs that can hatch Scyther and Pinsir, so don’t miss it.

If you include a player character sync pair or a Bug-type sync pair in your team for this event, your chances of getting an Egg will increase, so we recommend you train those sync pairs in preparation.

There’s also a very rare chance that some Eggs will hatch a Shiny Pokémon. We encourage everyone to get lots of Eggs and find their perfect partner. 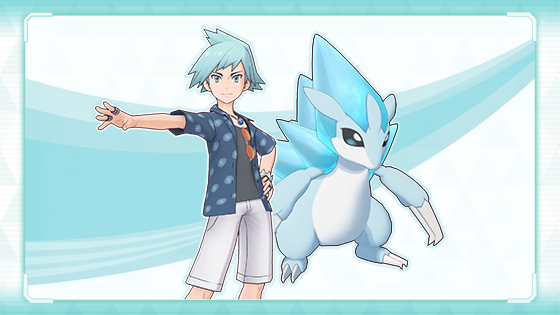 We’ve already seen Steven paired with Metagross, and next he’s teaming up with the Alolan Sandslash that he’s been training.

There’s one more summer seasonal sync pair that will appear as well, so look forward to their debut to find out who they are.

Type skills are scheduled to be introduced in late July’s update.

Type skills activate during battle if you form a team containing two or more sync pairs of the same type, strengthening the sync pairs on your team.

We’re also working on introducing team-based enhancements that are activated by conditions other than type, so stay tuned.

Major Update for the One-Year Anniversary

The first event of our celebration will be a legendary event in mid-August. This time, you’ll face the Legendary Pokémon Palkia.

Also in late August, we will launch other features previously announced, such as the Champion Stadium, in which you can take on Elite Four members and Champions from other regions and find new ways to strengthen sync pairs.

We’re working hard to make this massive update exciting for everyone!

Stamina and Other Improvements

We’re especially looking forward to hearing your thoughts on our trial launch of the stamina system, so please give it a try.

We are planning to put out another survey and would appreciate your feedback as we make balance adjustments moving forward.

We’ll be bringing you our next message as a video, scheduled for mid-August. In it, we’ll focus on the upcoming one-year anniversary celebration of Pokémon Masters.

We’re always working hard to deliver updates and improvements that make the world of Pokémon Masters as fun as possible.

Until next time, thank you for playing Pokémon Masters.