A Message from the Pokémon Masters EX Team
(Vol. 35)

A Message from the Pokémon Masters EX Team (Vol. 35)

Today, we’ll focus on details about new Sync Pairs that debut in the end of June, as well as events for July.

Story Event Summer Nights & Wishing Stars will begin on June 29, 2022.
This year’s theme is “summer festival,” and to go with the event, N and Hilda will appear in the Sync Pair Scout as seasonal Sync Pairs.
Who knows what will happen when Trainers and Pokémon gather together on the night of a summer festival? We hope you enjoy Pasio’s summer event!

N (Summer 2022) & Zoroark are a Dark-type strike sync pair.
With their Vivid Illusion! Move, they can raise their Sp. Atk by six stat ranks and their evasiveness by two stat ranks. Their main attack move, Night Daze, has a 40% chance of lowering the target’s accuracy by one stat rank.
They also have Passive Skills that grant them the Supereffective ↑ Next effect when entering battle with full HP or after using their Sync Move, so they’re versatile from start to finish in battles against opponents weak to Dark-type attacks.

Hilda (Summer 2022) & Grapploct are a Fighting-type support sync pair.
Their Get Gutsy! Move applies the Gradual Healing effect to themselves and raises the Defense and Sp. Def of all allies by two stat ranks. They also have a Passive Skill that raises the Attack of all allies by one stat rank when they are hit by an opponent’s attack move.
Plus, by using Topsy-Turvy, they can weaken their opponent by converting the target’s stat increases into stat reductions (excluding critical-hit rate).
In addition, they have Moves such as Brick Break and Protect, giving them a wide variety of ways to deal with opponents’ actions.

A New Tiered Scout Is Coming!

In Tier 5, the selectable sync pairs include the Seasonal Sync Pairs featured in this scout, so be sure to check it out!

Solo Event Strongest Fighters will begin on July 13, 2022.
Trainers who are passionate about training diligently on a daily basis will play a big part in this event! These Trainers will appear in the story, so we hope you look forward to it!

Also, there will be a battle event in which you’ll take on special trials. Some tricky special Missions that require some creative thinking will be available, too, so take on the challenge!

Egg Event Raise Tyrogue! will begin on July 15, 2022.
In this Egg Event, you’ll train with a Black Belt and be able to get Tyrogue Eggs.
Tyrogue can evolve into three different Pokémon depending on its Role. It can evolve into Hitmonlee if it has the strike role, Hitmontop if it has the tech role, and Hitmonchan if it has the support role.
Also, you’ll be able to form a sync pair with Tyrogue for each Role.
Get Eggs and train Tyrogue the way you like!

The festivities will be heating up as Pokémon Masters EX approaches its three-year anniversary. Today, we’d like to give you a sneak preview of some of the content and Rallies that will be coming your way in late July and in August.

An update for the Villain Arc is scheduled for late July. Following the Johto Chapter, we hope you’ll look forward to seeing which Sync Pairs will appear and how they’ll take the spotlight in the story.

Information on the Run-Up to Three Years Celebration!

The Run-Up to Three Years Celebration starts in mid-August!
Special events, Log-in Bonuses, and Rallies are also in the works. Plus, there will be an event that lets you team up with a special Sync Pair, so we hope you look forward to seeing which Trainers and Pokémon end up forming Sync Pairs!

We have follow-up information about the major improvements to UI usability that we mentioned in a previous message.
Development is progressing smoothly, and we are getting close to releasing these improvements.
Currently, we are able to share with you one screen that’s under development. This screen is related to the Sync Pair strengthening menu that we showed you last time. 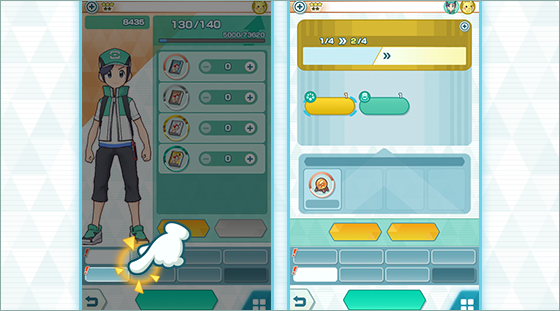 Various features for strengthening sync pairs that have been on separate screens up until now, such as Unlock Level Cap, Level Up, and Theme Skills, will be accessible from a single screen! You’ll be able to use these features by switching between tabs at the bottom of the screen.

In addition to this, we’re planning other improvements to the game’s usability as well, so please wait for further updates.

Note: This image is from content that is currently under development and is subject to change.

Our next message is scheduled for late July.
In it, we plan to share information about the Run-Up to Three Years Celebration, as well as new Sync Pairs and events that will arrive in August.